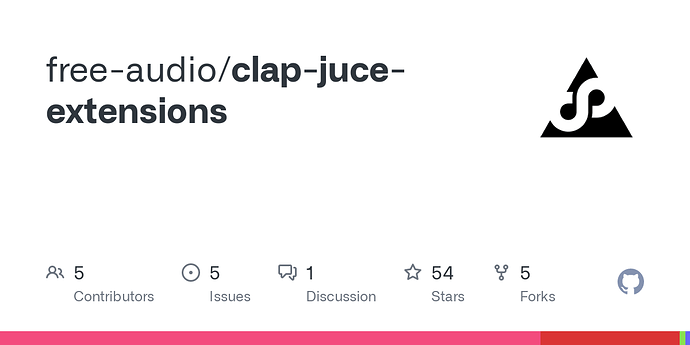 Contribute to free-audio/clap-juce-extensions development by creating an account on GitHub.

Haven’t tested it so far. Instead I’d really appreaciate official support for CLAP for JUCE.

I would Also appreciate official CLAP support for JUCE!

in the process of this: drop vst2 support. then there are no formats left anymore that don’t support sample accurate parameter changes and it will be easier for juce to work on that

I understand, but I’m I absolutely against dropping vst2 soon, because it’s still widely used and needs active support in case some future OS update (or whatever) breaks something (even when its not related to vst2).

(And I don’t wanna keep a second outdated JUCE repository in parallel; with all implications like two different apis for shared code between my product line)

This kind of abstraction is what defines a framework like JUCE.

I think sample accurate parameter changes can be implemented in vst3&CLAP and simply ignored in older formats. One does not prevent the other.

yeah, that makes sense. just wanted to say putting the work into supporting the new format would probably feel more rewarding if there is also a chance to implement its unique features

i just wanted to push this post because i thought of a new argument for clap support in juce lately that i want you all to consider:

i was talking to a youtuber who only reviews plugins of developers who support all formats and he enlisted vst, aax and au, on windows and mac. he does that because he came from pro tools and always felt frustrated about plugin reviews of plugins he can’t use. he only wants to bring joy to everyone though. but i thought, while his goal is noble, his approach is not very good, because aax and au are both format that try to exclude themselves from the majority of musicians and audio engineers. if the moral goal is to support the formats that really try to unite everyone and to maintain plugin culture, then the focus should be on formats that actively want to be implemented in all DAWs, which are basically just VST and CLAP. (and lv2, tbf, but it kinda never took off for some reason)
So that’s why I’d suggest that native integration of CLAP into juce should have a higher priority than these other formats that don’t even try to make themselves available for everyone. If they get very unpopular because of that, maybe that makes more DAW-developers focus on the good formats, which would give every developer an easier time supporting every format and also make every user happier, because no one must feel excluded anymore.

Another push for CLAP - REAPER:

Another push for CLAP

As MultitrackStudio, Bitwig, and now Reaper support CLAP plugins we plan to release all our plugins with CLAP support soon. See also https://www.martinic.com/blog/clap-audio-plugin-format

I would also like to see CLAP supported in JUCE.

I would also like to see CLAP support. But adding CLAP support also means sample accurate modulation, automation, and the integration of expressions for me.

I would like to see some bigger changes and simplifications in the JUCE wrappers to make this possible (sample accurate handling of parameters, expressions, and MIDI data in the same function → processing method) :

I’m not sure if we should take the VST3 standard. I also see some problems when we have to check the parameters for changes. There are also questions about how this works when you are using the ValueTreeListener to update your parameters also for the DSP code. We have a plugin with >10000 parameters. I don’t think I can check them all when the buffer size is 32 samples and I like to have the DSP code decoupled from parameter value classes. At the moment we have to use the listeners to update …