Reference to point is ambiguous

Hi, started getting this in OSX release builds. Debug is fine.

I have copied juce::StandaloneFilterApp so that I can add a setUsingNativeTitleBar() call to initialise. 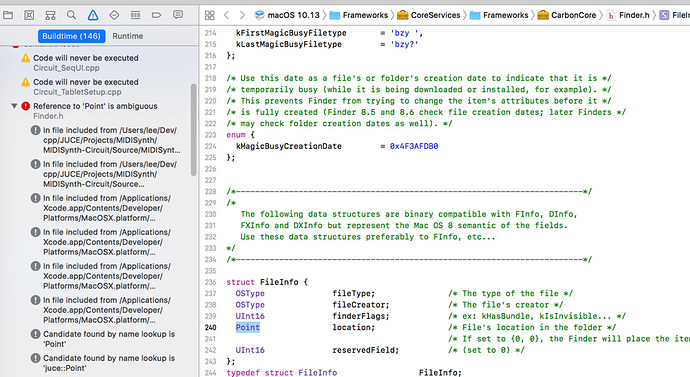 This all works fine in Debug but when I go to build release, I get the error. Any ideas?

If you’re including system headers, just include them before the juce ones.

Hi Jules, ok thx - that’s got rid of the Point issue it seems - I’m now getting Button ambiguities, but at least they’re in my code so I can go and scope them.

So it looks like I now need to replace all Button references with juce::Button - any shortcut to doing this? thx

Or don’t include the other headers except where you absolutely need them, so that there are fewer clashes. That’s generally good advice anyway.

I did try that in a top level header file, but then got told I needed to put class in front of all Button references so it’s still same amount of effort - at the end of the day, it’s not a big deal as I can just global replace all buttonClicked methods

However, it does make me think I’m just doing something wrong here?

I’ve copied juce_StandaloneFilterApp.cpp to my own class so I can have all its functionality but have my own initialise call. it’s all the header files at the beginning of this file that I’m including (which are obviously all needed) that is causing this problem to happen. Maybe there’s a better way to be going about replacing initialise() than this? Though from reading other posts, creating my own JUCEApplication class is the way to do.

In your copy of juce_StandaloneFilterWindow.h add:

Hi Rail - thanks for that. That was the key - I’d done all the same steps as you, but when creating my own app from juce_StandaloneFilterApp.cpp, I’d copied all the header files across from that - replaced them just with the juce_IncludeModuleHeaders.h as you suggested and all the duplicates have gone… thanks!

FYI this (Reference to ‘Point’ is ambiguous) is coming up again when trying to build the (non modified) JUCE AudioPluginHost on Mac Catalina and JUCE 5.4.7 (I just re-downloaded to verify) - using Projucer/all files from 5.4.7 zip from the ‘get JUCE’ download links.
(Note the host app in the zipped download still has ROLI copyright notices/ownership too)

Hi wavesequencer, I have this exact issue as you. Did you figure it out?

I just modified the files in question to add using juce::Point;

Thanks. Seems to be a namespace conflict. Replacing “Point” with “juce:Point” fixed it for me.