Info.plist is not generated (anymore?) for my builds
running Xcode 7.1
Not sure if it is something I’ve done or not, since it probably been like this for a while and BitWig was the first host to reject loading VST wiithout (that I know of).
Is it a setting I can do in ProJucer or something I need to do in xcode?

The Projucer now builds a plist for every target and should copy the relevant plist into the bundles. If that’s not happening then it’s usually because your jucer file is still using a custom build script step. Make sure that this is empty: 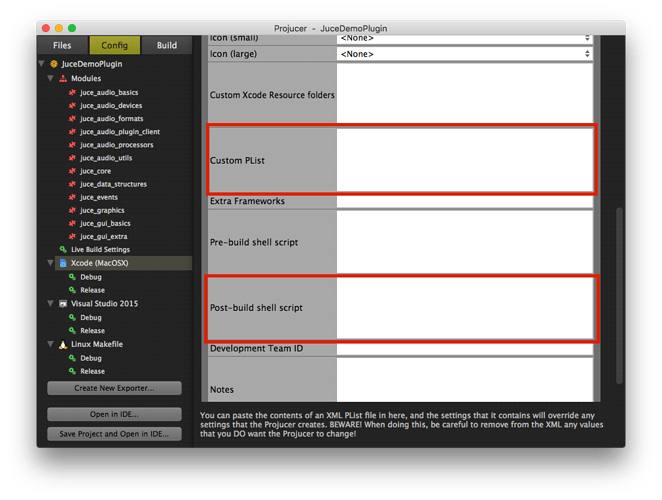 Thank you, after re-creating XCode build target without “Custom Plist” and “Post-build shell script” and “Pre-build shell script” it works.
I can’t help but thinking though that it would be nice to be able to add pre/post-build script/commands even when letting ProJucer handle Info.plist stuff. Preferable even different commands for Debug and Release.
Perhaps a separate checkbox for “let ProJucer handle Info.plist” or something could be useful.

You can still add your own pre/post-build scripts.

Ah I get it, bit tricky indeed but it at least mean I can do post-build stuff, that is nice.