Would it be possible to add in the Projucer support to build a standalone version in the Audio Plugin category ?

There is a standalone version in the juce_audio_plugin_client so it would make sense to allow this, no ?

This will be a feature of JUCE 5 - and we will soon release a preview of this feature on the develop branch.

oki doki.
I suppose you will let us know the new Juce 5 features at NAMM ?

As long as you pay me the beer you owe me

No hints from the code I've sent you ?

I think our juce meetup event an NAMM will have free beer!

Does invitation have already been sent ?
Which day is this ?

I think it might have been on the juce newsletter - it’s the Friday evening. 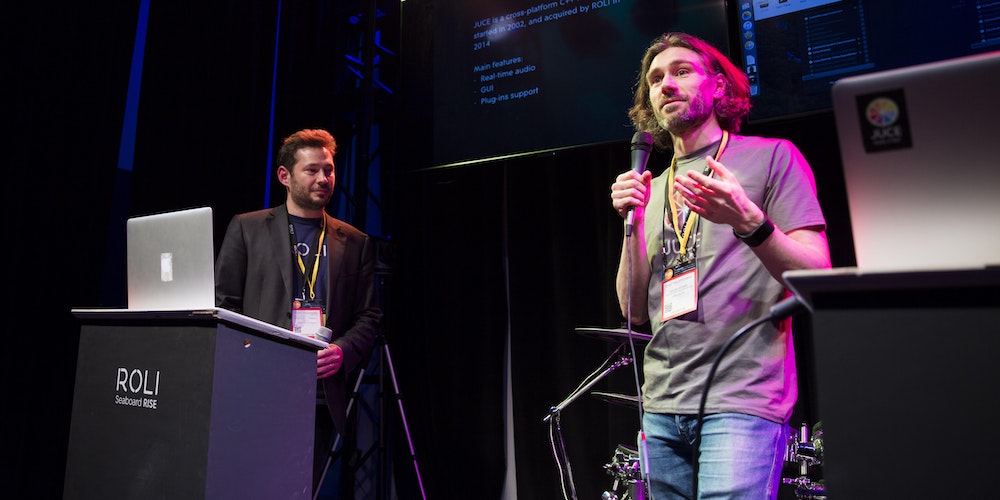 You are invited to ROLI's Audio Developer Event at NAMM, 6:30pm, 20th January 2017 in Anaheim, California. Meet Jules Storer and Jean-Baptiste Thiebaut of the JUCE team for a presentation of the ROLI's products for developers, followed by a Q&A...

Well… I have successfully ported projects that were built using JUCE 3 with its polymorphic plug-in format (hence including the stand-alone app) to JUCE 4.3.0 fairly easily.

The best part of it is that they still happily build polymorphically and including the stand-alone app as well (we haven’t done any effort to extend to AUv3 though).

I guess the lack of a stand-alone target is more a limitation of Projucer (and possibly its need to support AUv3) rather than of the JUCE library itself.

@otristan if you feel like experimenting, you could download a very old JUCE version (mine was 3.1.1 or 3.2.0 if I remember well), build the Introjucer and bootstrap a project with it. Then, fast forward the JUCE source to the current version and cross your fingers…

What are the features of the standalone plugin? I couldn’t figure out is it actually what it could and couldn’t do (on OS X, I saw MIDI inputs only, and on Windows, audio only, but no sound from an internal player).

Seems like the processing code is not called at all??

but it’s not currently for the cases I have.

It’s hard for us to figure out why your processing functions aren’t being called without seeing your code. Try the JUCE audio plug-in demo and work through what your code is doing differently.

I’m not doing anything fancy. The plugin itself works, but the standalone version doesn’t work: https://github.com/mbrucher/ATK-plugins/blob/master/ATKJUCE/Source/PluginProcessor.cpp
I haven’t changed the JUCE modules that are actually tackling this, so I don’t know who is calling the processing function. As I’ve said, they are called in plugin mode, not in the standalone.

Does the process method get called if you try the juce plugin demo in Standalone mode?

I haven’t checked it yet (I don’t have projucer built on my current box), but if it doesn’t call processBlock (task of the JUCE framework), once again, who is supposed to call it? I just modified the content of this function, nothing more.

is there and audio card setup in the standalone version ?

Yes, you can choose for instance DirectSound.