lol relying on user morality, eh? good luck with that

Surely users can remove the splash screen without violating the terms of the GPL (next question: is JUCE still going to offered free under the GNU public license).

I’m all for crediting JUCE in my software, and I do every chance I get. If some of our applications already feature a splash screen, is it be Ok for us to simply modify it so that it states quite clearly, ‘made with JUCE’ or whatever text is required? As big or small as you like, along with your logo. Or must we now show 2 splash screens if we wish to show our own?

I’ll trade having to open source my code for a splash screen!

But in all seriousness, will there be any new functionality in the ProJucer? I know some components aren’t fully supported in the ProJucer and some componets can’t be implemented through it, has anything in this field been added?

Im sorry but im super pissed about this,

Do you have a phone where we can talk about this?

In case I wasn’t clear, I’m Ok with the splash screen. But I would rather plug JUCE on my own splash screen according to their requirements than have to show two splash screens crediting those who contributed to the development of my applications.

OMG OMG OMG, what a lot of crazy over-reaction and panic!

Please ignore the FUD that the post title suggests - the splash screen is NOT “mandatory”!

It’s a new, additional option that some users may want to choose.

This just provides a new option that lets people do that. It does not replace or affect the GPL in any way. A GPL app does not need a splash screen, and it’s easy to disable it. And anyone who’s already a paying licensee won’t be affected by this at all.

But we get many emails from people who want to launch a closed-source product but have no budget, and this is a way for them to do that.

The rest of you, calm down and carry on!

So, users of the free model can release apps that are closed source, as long as they display the splash screen?

The rest of you, calm down and carry on!

Perhaps a better planning of the newsletter and the overall communication will avoid this mess in the future.

A nice pinned post with all the details you want to disclose about the new version would have helped.

There seems to be conflicting information, regarding AAX, between the newsletter and the website version (Apologies for the volume setting splash): 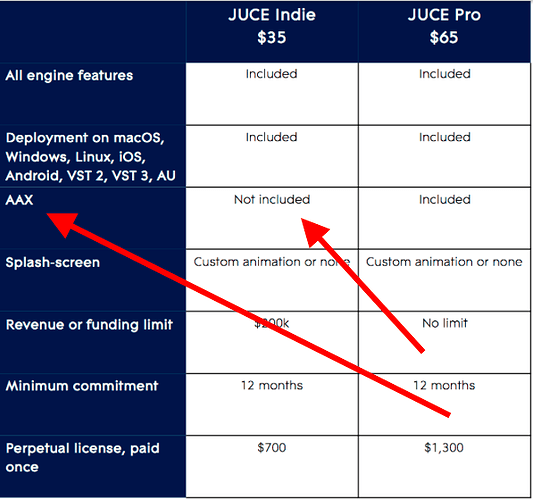 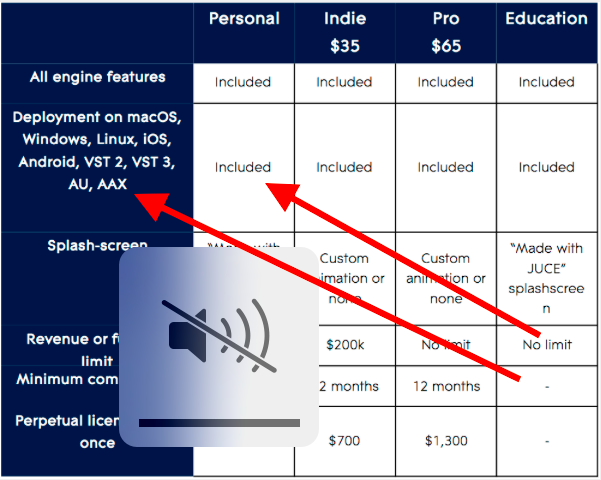 Please ignore the FUD that the post title suggests - the splash screen is NOT “mandatory”!

Fair enough, now that it’s clearer I’ve removed the word from the title.

The possibility of releasing closed source products even for developers with no budget is certainly welcome.

As mentioned by @Rory above, would you also consider slightly different means for showing the “Made with JUCE” claim? The observations and questions he made seem pretty reasonable to me.

I’ll add to that that, for someone not willing to display it in form of a splash screen, permanently adding a “badge” of specified minimum size to the GUI of the applicaton may be a more attractive alternative, possibly even more effective if said badge is a clickable “link” that launches the browser to “www.juce.com”

There seems to be conflicting information, regarding AAX

The correct information is the one in the second table, with 4 columns, so AAX is included.

See: AAX support will be included in Indie for JUCE 5

Wow, so developers can release closed source apps just by displaying a splash screen? That’s quite generous. All the same, I’m more than happy to plug JUCE in my splash screens

Ah, fair enough. I think your point is correct and that a little bit of annoyance is needed to promote the upgrade to one of the paid licenses.

Still, it would be nice if ROLI could accept the merge of the information in their splash screen within another splash screen if the app already needs one, as @Rory proposed.

That seems to be it, but only for developers or companies which make less than $50k per year.

How is this splash screen supposed to work? Each time the plugin gui is displayed or once per daw session / only first time the gui is openend?

So far, this sounds great:

Could we get some info on the “user interfaces” and maybe any improvements with components in the ProJucer?

i love you jules, sorry about that, btw i need your address want to send you a present

That addresses my last concern. I’ve considered it thoroughly and IMO these are fantastic licensing changes (after the AAX inclusion) that are really fair for all brackets of developers. I am more pumped than ever for the future of JUCE!

Though, I say that from the POV of a student who uses JUCE extensively for open source projects and shoves it on his co-workers, I haven’t shipped anything commercially…